The States concerned must therefore feel that they are conforming to what amounts to a legal obligation. The Parties were under an obligation to act in such a way that in the particular case, and taking all the circumstances into account, equitable principles were applied.

Consequently, where two equidistance lines were drawn, they would, if the curvature were pronounced, inevitably meet at a relatively short distance from the coast, thus "cutting off" the coastal State from the area of the continental shelf outside. 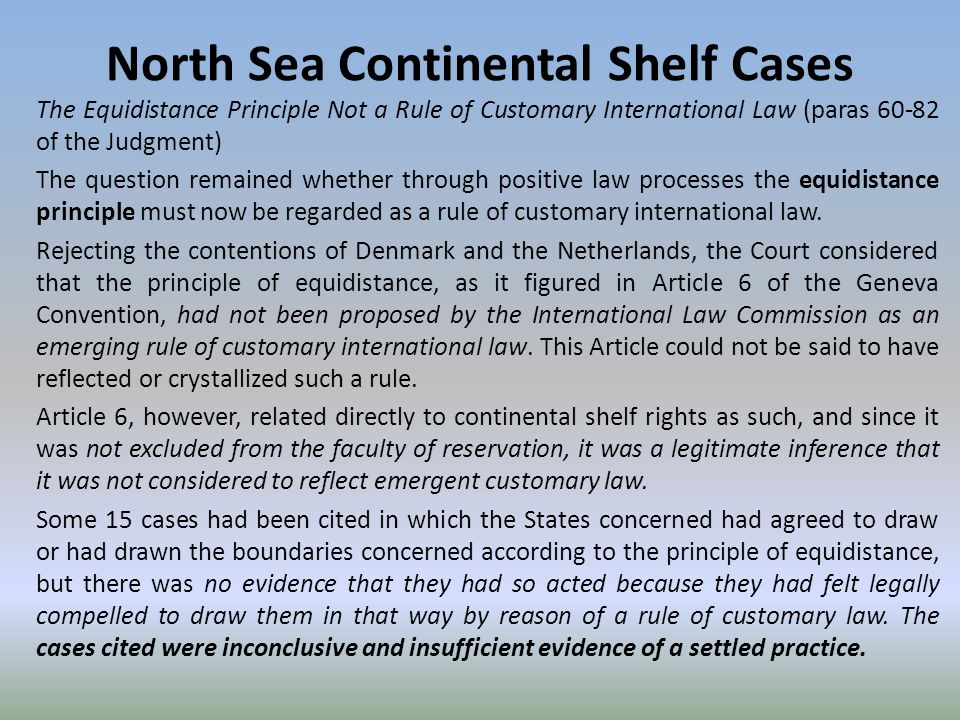 That right was inherent. The Court consequently concluded that the Geneva Convention was not in its origins or inception declaratory of a mandatory rule of customary international law enjoining the use of the equidistance principle, its subsequent effect had not been constitutive of such a rule, and State practice up to date had equally been insufficient for the purpose.

Furthermore, had the Federal Republic ratified the Geneva Convention, it could have entered a reservation to Article 6, by reason of the faculty to do so conferred by Article 12 of the Convention.

The Court had to decide the principles and rules of international law applicable to this delimitation. Such a method would have to draw its legal force from other factors than the existence of those advantages. But the real issue was whether it followed that every part of the area concerned must be placed in that way. In order for this process to occur it was necessary that Article 6 of the Convention should, at all events potentially, be of a norm-creating character. It was not a question of apportioning or sharing out those areas, but of delimiting them. Although the Parties intended themselves to apply the principles and rules laid down by the Court some indication was called for of the possible ways in which they might apply them. Denmark and the Netherlands claimed that the test of appurtenance must be "proximity": all those parts of the shelf being considered as appurtenant to a particular coastal State which were closer to it than they were to any point on the coast of another State.

This Article could not be said to have reflected or crystallized such a rule. In the course of negotiations, the factors to be taken into account were to include: the general configuration of the coasts of the Parties, as well as the presence of any special or unusual features; so far as known or readily ascertainable, the physical and geological structure and natural resources of the continental shelf areas involved, the element of a reasonable degree of proportionality between the extent of the continental shelf areas appertaining to each State and the length of its coast measured in the general direction of the coastline, taking into account the effects, actual or prospective, of any other continental shelf delimitations in the same region.

It was admitted on behalf of Denmark and the Netherlands that in the circumstances the Convention could not, as such, be binding on the Federal Republic.

The cases cited were inconclusive and insufficient evidence of a settled practice.

This view had much force; the greater part of a State's continental shelf areas would normally in fact be nearer to its coasts than to any other. Judgement: The International Court of Justice delivered its judgement by 11 to 6 votes in the case. Under the formal provisions of the Convention, it was in force for any individual State that had signed it within the time-limit provided, only if that State had also subsequently ratified it. The Court found that the boundary lines in question were to be drawn by agreement between the Parties and in accordance with equitable principles, and it indicated certain factors to be taken into consideration for that purpose. Of this there was no evidence. These two concepts, of delimitation by mutual agreement and delimitation in accordance with equitable principles, had underlain all the subsequent history of the subject. It had been contended on behalf of Denmark and the Netherlands that the whole matter was governed by a mandatory rule of law which, reflecting the language of Article 6 of the Geneva Convention on the Continental Shelf of 29 April , was designated by them as the "equidistance-special circumstances" rule. The Court held that Germany had not unilaterally assumed obligations under the Convention.

Widespread and representative participation It held that each party had an original right to those areas of the continental shelf which constituted the natural prolongation of its land territory into and under the sea.